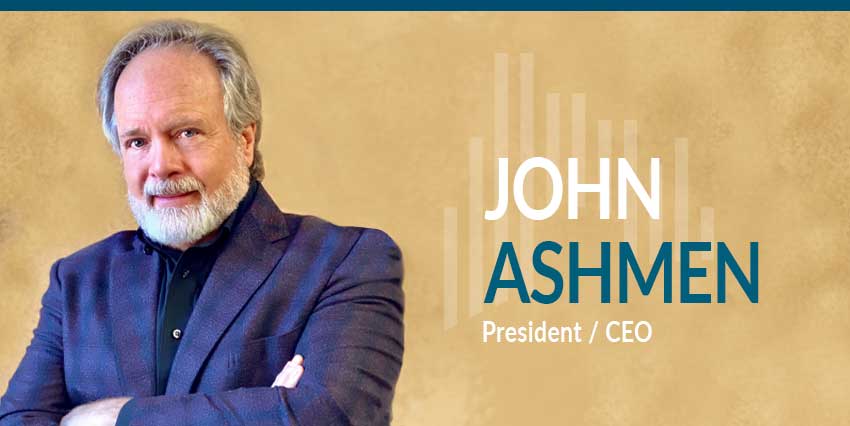 John came to his CEO post at Citygate Network in 2007 from Christian Camp and Conference Association, where he served for 15 years in the COO role. The combination of the two positions has given him a career of almost 30 years in association management. John holds a Bachelor of Science degree in Bible, with a social work emphasis, and a Master of Organizational Management. He is the author of Invisible Neighbors, considered by many to be the “how-to manual” for followers of Jesus who are serious about meaningful engagement with the poor. He also serves on the board of the National Association of Evangelicals. He and his wife, Judi, enjoy tennis and overnight hikes in remote, mountainous regions. Thanks to their three married children, they now have a growing collection of amazing grandchildren.

John Ashmen was named president and CEO of Citygate Network in 2007. Since then, he has led the organization through a reassessment, relocation, re-staffing, refocusing, rebranding, and a pandemic. Through all of this, Citygate Network membership has grown by almost one-third.

Prior to 2007, John served for nearly 15 years in the COO role at Christian Camp and Conference Association, overseeing publications, educational events, technical resources, and marketing for this national confederation. For much of that time, he also was an advisor to the board of directors of Christian Camping International/Canada, plus he helped expand the scope and leadership expertise of Christian Camping International/Russia. Drawing on his experience in actual camp administration in New Jersey for 15 years, and then association management (working with more than 1,000 camps and conference centers), John was the lead writer, and executive producer for the multi-award-winning Cairn Series™ professional training CDs, which were deemed the definitive work on Christian camp and conference history and leadership orientation.

John holds a Bachelor of Science degree in Bible, with a social work emphasis, from Cairn University in Pennsylvania, and has a Master of Organizational Management from the University of Phoenix, based in Arizona. His writings have appeared in numerous books, journals, and websites, and he continues to teach countless ministry management seminars internationally. John’s book, Invisible Neighbors, (published by Cross Section) is widely considered to be the how-to manual for followers of Jesus who are serious about meaningful engagement with the poor and powerless. In this same ministry genre, John was instrumental in the establishment of the Global City Mission Network, a nexus of faith-based organizations serving those in abject poverty in major cities around the world.

He is a two-term board member of the National Association of Evangelicals (NAE), a network of denominations, organizations, schools, and more than 45,000 local churches from nearly 40 different denominations. Additionally, John is on the steering committee of the Circle of Protection, an alliance of national Christian leaders and denominational heads who are focused on promoting legislation to end hunger and poverty. He was also recently appointed to the U.S. Interagency Council on Homelessness’ Strategic Planning Task Force, working directly with America’s homelessness czar.

John and his wife, Judi—who recently retired from more than 30 years in the medical field—live in Colorado Springs, Colorado. Together, they enjoy tennis, camping, and hiking in remote mountainous areas, at home and abroad. Their three married children—who live in in New Jersey, Texas, and Tennessee—have provided them with seven grandchildren to visit, as often as they get the chance.

The following images are provided for promotional use. Click an image to preview and download. Be sure to use the following attribution with the photo: ©Citygate Network. Used with Permission.