I had breakfast this morning with our friend, Robert Marbut, tapped a week ago by President Trump to head the U.S. Interagency Council on Homelessness, and confirmed late yesterday afternoon. We laughed about me being his first “official” appointment. (His next meeting was at the White House.)

As expected, Robert is being trashed in the press from coast to coast because he doesn’t believe Housing First is the “silver bullet” to end our country’s critical homelessness crisis. That’s because, like us, he doesn’t believe lack of affordable housing is the primary problem. Like us, he believes that lack of affordable housing plays into it significantly, but equally problematic is lack of education and job skills, wage disparity, mental illness, recreational marijuana, alcohol and drug addiction, human trafficking, family dysfunction, young people aging out of the foster care system, LGBTQ youth escaping domestic persecution, and much more. 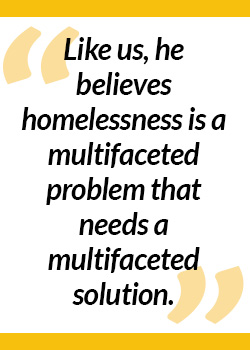 To be clear, Citygate Network believes that Housing First is an important note on the solution scale, and that it saves lives every day. But the government, up until now, has pretty much only played that one note. We need rich chords to experience a symphony of success in our country.

This really isn’t an issue of partisan politics fighting for philosophical control. It has more to do with ability and capability to address underlying causes. You see, the government can do—and actually does—something about corporeal poverty; but it’s not in the government’s purview to address relational and spiritual poverty—which are why so many people fall into destitution in the first place or remain poor and powerless. The strong lines of supportive friends and a deep spiritual mooring can keep people from going adrift. At Citygate Network, we believe II Corinthians 5:17 speaks to this. It’s what adds the hope to the help that our members bring.

All of the government programs—whether it’s Housing First or Rapid Rehousing or Home for Good or whatever—are only touching about a quarter of the people who need help. The other ± 75 percent are languishing on the streets. I also know that in many U.S. cities, of all the people who are placed in government-funded housing, it's not uncommon to see between half and three-quarters back in a mission or similar ministry before the end of the first year.

For all of these reasons, we look forward to helping Robert get a better handle on the number of people who are actually homeless (i.e., confront the real facts) and look at building that multifaceted solution—which certainly must involve the greater faith community across the country.