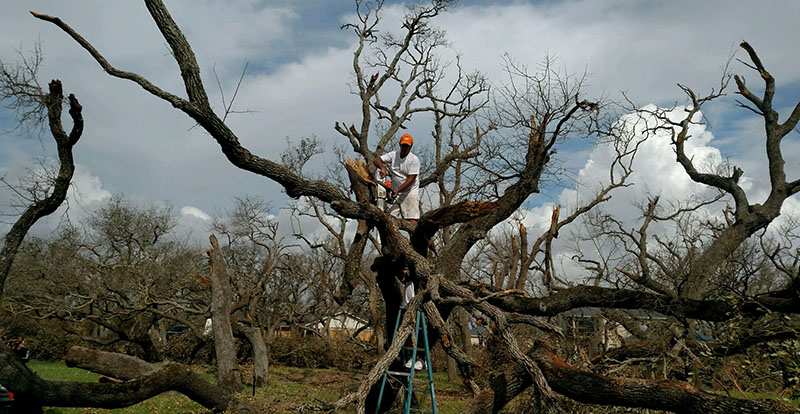 (COLORADO SPRINGS, CO, September 28, 2017)—Demonstrating that the worst of times often brings out the best in people, Association of Gospel Rescue Missions (AGRM) members from Indiana, Tennessee, Kentucky, Texas, and Arizona—among others—have traveled thousands of miles in recent weeks to help peers in hurricane-stricken communities. The relief effort provided critical back-up for local response teams overwhelmed by the widespread devastation along the Texas and Florida coasts, as well as inland areas.

Emergency help provided by the rescue mission teams ranged from cutting and removing fallen trees to tearing out damaged flooring and wall coverings, and from delivering food and clothing to cooking and relieving local mission staff members battling fatigue. All assistance was provided free of charge.

AGRM President John Ashmen praised the coordinated response. “The individuals who left the comforts of home and family to provide desperately needed help show the compassionate spirit within our rescue missions,” said the national faith-based leader. “Their ability to mobilize so quickly stems from the close-knit nature of our community, as well our direct urging for missions to help other missions deal with the impacts of the hurricanes.” He notes that AGRM member missions have daily experience in helping hungry, homeless, abused, and addicted people in crisis, which allows for an easy transition to helping in a natural disaster.

After nearly a week in Texas, the Tennessee unit headed back to Nashville to regroup, and then it was off to south Florida—first Naples and then Miami—delivering reinforcement to AGRM missions and churches there. Hurricane Irma’s fury could be seen and felt everywhere, as crews worked feverishly to help and comfort families and survivors displaced by 100-mile-per-hour-plus winds and widespread water damage.

Also among those on the frontlines: An eight-person team from Wheeler Mission Ministries in Indianapolis that drove all night to support clean-up and relief efforts at St. Matthew’s House, the AGRM member rescue mission in Naples. Brandon Andrews, director of the men’s residential center at Wheeler Mission, quickly organized the emergency mobile response team once it became apparent Irma’s path would create massive damage to the area.

While the Wheeler Mission team assisted with cleanup, the biggest need for St. Matthew’s House centered on staff relief. Many employees and volunteers had been working up to 20 hours a day since the hurricane hit. Some even slept at the beach to obtain relief from the late summer heat. The Wheeler relief effort allowed the staff at St. Matthews to be with their families, obtain much-needed rest, and assess damage of their own homes.

Local rescue mission leadership in Naples, as well as in Miami and Texas, expressed deep gratitude to their AGRM counterparts for their sacrifice and selflessness in helping them respond to the crisis.

The effectiveness of faith-based organizations like AGRM in responding to natural disasters is well documented, according to a recent article in USA Today. One CEO of a nonprofit alliance of volunteer organizations that works with the Federal Emergency Management Agency (FEMA) in directing disaster assistance says more than three-quarters of all recovery occurs because of nonprofit organizations—the majority of which are faith-based.

“Our extended mission family—including staff, volunteers, and donors—tends to react to natural disasters on a deeply personal level,” said Ashmen of AGRM’s member missions. “Much of that stems from their connectedness and belief in something greater than self. As a result, when we learn of others suddenly finding themselves in a vulnerable position, we are quick to reach out—wherever it’s needed.”